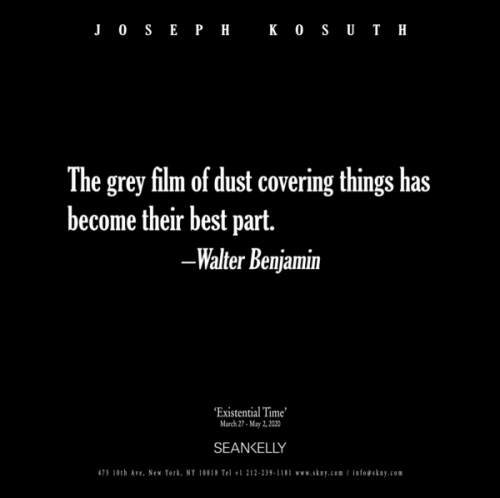 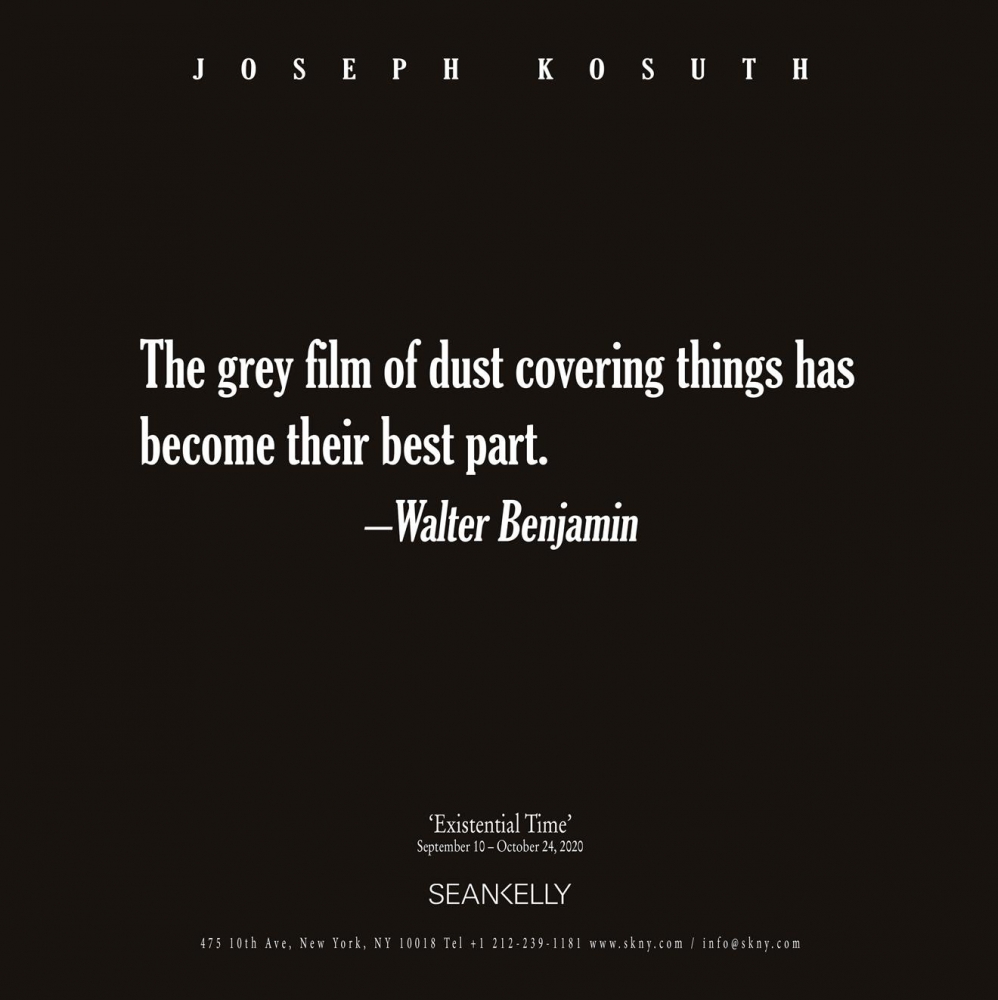 For his eighth solo exhibition with Sean Kelly Gallery, ‘Existential Time’, Joseph Kosuth has developed a series of installations that address the problem of time and existence, emphasizing the lack, limitations, and abundance of meaning that surrounds the experience of being in time, past and present.

Over the last six months, time—how we experience it and how we perceive it—has shifted irrevocably for each of us, making the timing of this exhibition, which was supposed to have opened in March before the pandemic descended upon us, even more appropriate and poignant.

This presentation of three separate bodies of work: ‘Existential Time,’ ‘Illumination (Existential Time)’ and ‘Quoted Clocks,’ all from 2020, investigates time and existence through a variety of references from other writers. Kosuth’s reflection on time in this exhibition stems from both a personal and philosophical concern with finding meaning within the various contexts and narratives life provides. It is thus also an investigation into the process of making meaning in artistic practice.

As artists we all begin to construct with what is given. We appropriate fragments of meaning from the detritus of culture and construct other meanings, which are our own. - Joseph Kosuth 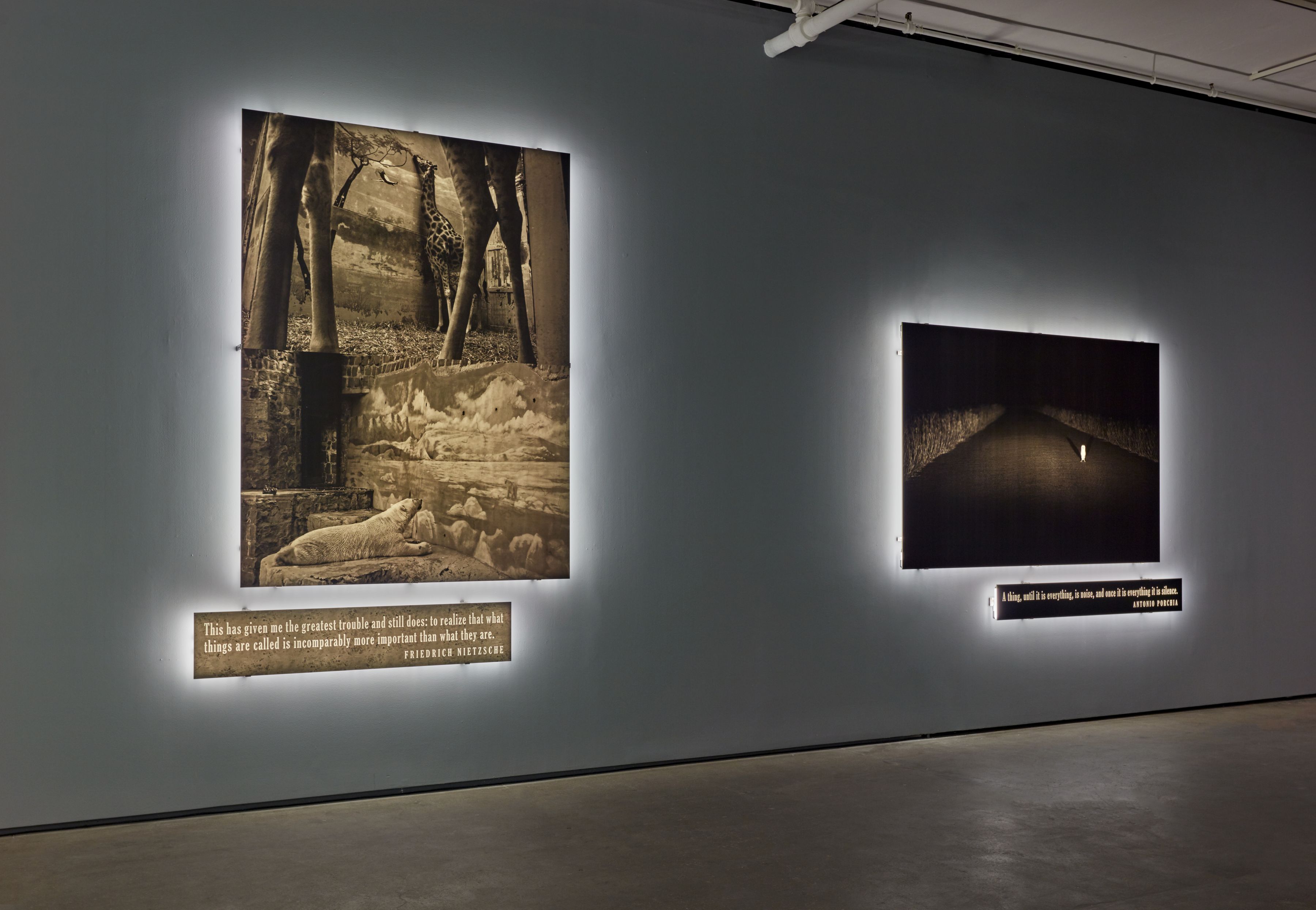 silkscreen on laminated glass and neon mounted directly on the wall

silkscreen on laminated glass and neon mounted directly on the wall

In the installation ‘Quoted Clocks’, Kosuth continues his ongoing conceptual concern of exploring relations between language and visual signification. Each of these twenty works is created from a standard analog clock, which represents the empirical passing of time, as its hands trace its face by the minutes and hours. At the same time, the clock is imbued with philosophical meaning through the figurative use of quotations taken from both familiar and obscure writings by authors and philosophers. Each clock also bears the inscription, “’Existential Time’ Sean Kelly New York, 2020.” 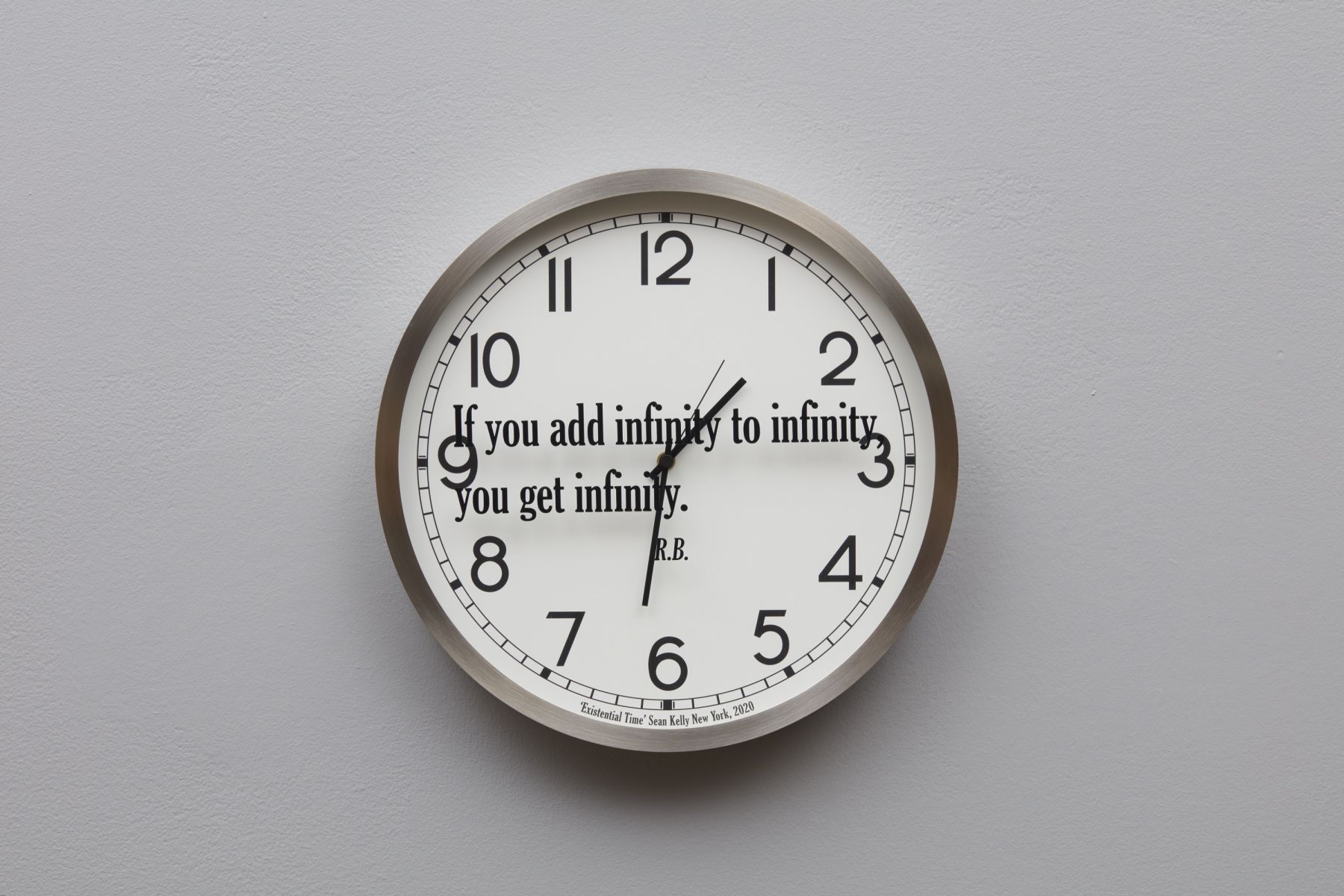 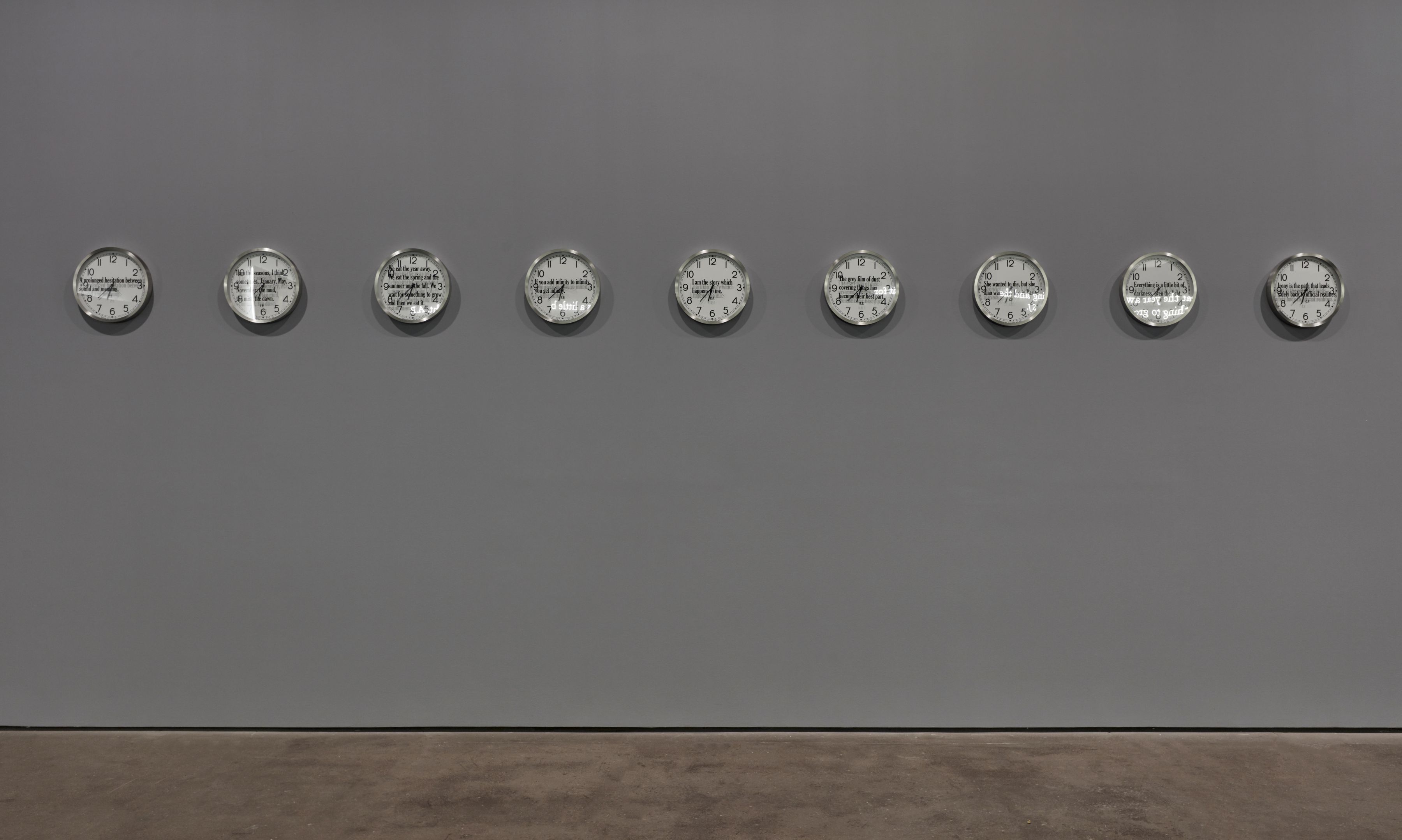 'Quoted Clocks #32', 2020
“Let us again pretend that life is a solid substance, shaped like a globe, which we turn about in our fingers.”
– V.W. (Virginia Woolf)

Joseph Kosuth, one of the pioneers of Conceptual art and installation art, has initiated language-based works and appropriation strategies since the 1960s. His work has consistently explored the production and role of language and meaning within art.

Born in 1945 in Toledo, Ohio, Kosuth attended the Toledo Museum School of Design from 1955 to 1962 and studied privately under the Belgian painter Line Bloom Draper. From 1963 to 1964, he was enrolled at the Cleveland Institute of Art. In 1964 and 1965 Kosuth studied with Roger Barr at the American Center in Paris.

In 1965, Kosuth moved to New York to attend the School of Visual Arts, where he would later join the faculty. Soon after, he abandoned painting and began making conceptual works, which were first shown in 1967 at the exhibition space he co-founded, known as the Museum of Normal Art. In 1969 Kosuth held his first solo exhibition at Leo Castelli Gallery, New York, and in the same year became the American editor of the journal Art and Language.

From 1971-1972 Kosuth studied philosophical anthropology (with Stanley Diamond) and philosophy at the Graduate Faculty of The New School for Social Research, New York. The philosophy of Ludwig Wittgenstein, amongst others, influenced the development of his art from the late sixties to mid-seventies. His more than fifty-year inquiry into the relation of language to art has taken the form of installations, museum exhibitions, public commissions and publications throughout Europe, the Americas and Asia, including Documenta and the Venice Biennale on multiple occasions.

Joseph Kosuth lives and works in New York and London. He has been awarded the Brandeis Award, 1990; Frederick Wiseman Award, 1991; the Menzione d'Onore at the Venice Biennale, 1993; and the Chevalier de l'ordre des Arts et des Lettres from the French government,1993 amongst others. He received a Cassandra Foundation Grant in 1968. In June 1999, a 3.00-franc postage stamp was issued by the French Government in honor of his work in Figeac. In February 2001 he received the Laurea Honoris Causa, doctorate in Philosophy and Letters from the University of Bologna, Italy. In October 2003 he received the Austrian Republic’s highest honor for accomplishments in science and culture, the Decoration of Honour in Gold for services to the Republic of Austria. Kosuth’s work titled, ni apparence ni illusion opened at the Musée du Louvre, Paris in 2009 and became a permanent installation in 2014. In May 2012 he was inducted into the Royal Belgian Academy. Kosuth’s internationally recognized work has been the subject of solo exhibitions at institutions including the Multimedia Art Museum, Moscow, Russia; the Kunstmuseums Thurgau, Warth, Switzerland; Haus Konstruktiv, Zurich, Switzerland; and the Australian Centre for Contemporary Art, Melbourne, Australia, amongst others. Most recently, in 2019 Kosuth installed permanent public installations at the Miami Beach Convention Center, Miami, Florida and Bill Graham Civic Auditorium, San Francisco, California. His work is featured in major private and public collections including the Museum of Modern Art, NYC; the Tate Gallery, London; the Solomon R. Guggenheim Museum, NYC; the Whitney Museum of American Art, NYC; the Van Abbemuseum, Eindhoven; the Stedelijk Museum, Amsterdam; the Louvre Museum, Paris, France; the National Gallery of Victoria, Melbourne; the Museum of Contemporary Art, Sydney; the Centre Pompidou, Paris; and the Galleria Nazionale d’Arte Moderna, Rome amongst many others worldwide.